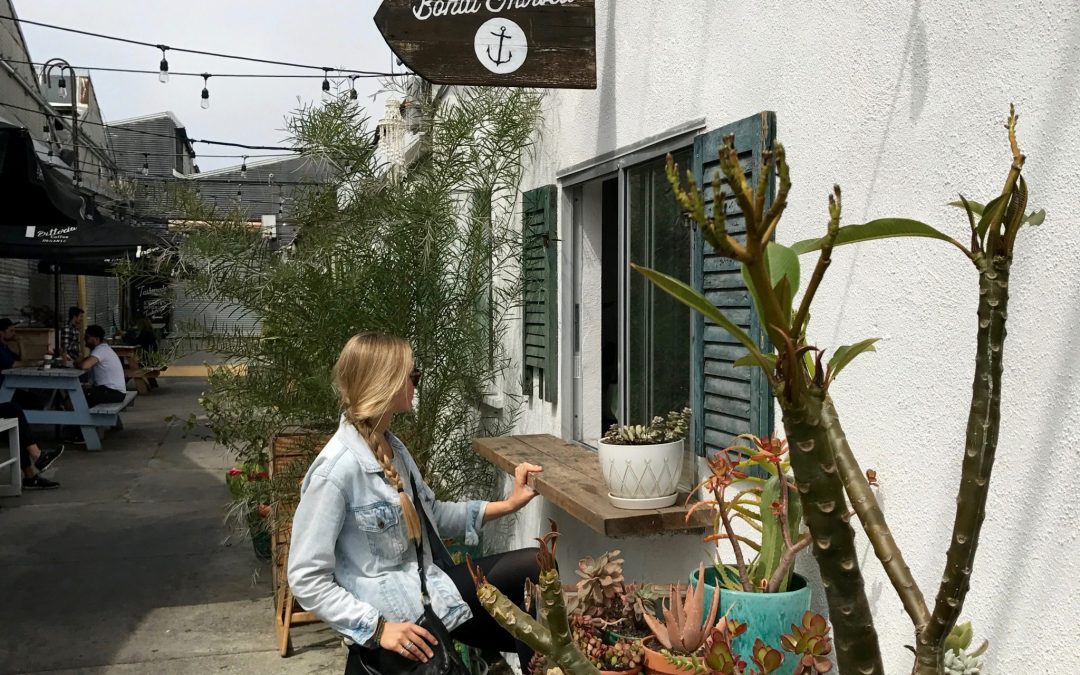 With only a very short time to spend in Los Angeles, we decided we were best to focus our time on really getting to know the area we were staying, Santa Monica, rather than trying to see everything…

I had no idea LA was quite so big, and everywhere we put in maps seemed to be at least an hour drive (you can add another hour or so to that if you’re travelling in peak hour!) And it’s always good to save some things on the to-do list for next time. In a city like LA you are never going to be short of things to do.

We arrived very early and of course after that dreaded 15 hour flight from Sydney, we were starved… So we dropped off our bags and checked in at the beautiful beach front hotel, Shutters, and got an uber to Bondi Harvest. We both had the smashed avo and halloumi on rye toast (amazing) and two very needed coffees to get us through the day. We also ordered wellness shots to replenish our systems.

We then walked along Venice Beach until we reached Abbot Kinney Road – Here you will find an abundance of healthy cafes, world class restaurants and beautiful boutiques. We, of course, headed straight for Pressed Juicery to try their insta-famous ‘Freeze’ soft-serves. We can say that it certainly lived up to expectation. Tip: make sure you get the ‘clean’ chocolate sauce as a topping.

Allow some time to spend exploring the boutiques, too. You’ll find everything from interiors, homeware, clothing and much more.

After having a rest by the stunning pool at Shutters hotel, we went downstairs to enjoy a margarita overlooking Santa Monica Beach at The Living Room, before returning to Abott Kinney Road for dinner. With the plethora of buzzy restaurants on this street it was hard to choose, ultimately deciding on Wabi – a Japanese fusion restaurant and sushi bar. Their cocktail menu is also great – I recommend the ‘Yoga Pants’ with aloe vera liquor, gin, celery, honey, lemon and celery salt… Weird but it works. To eat, try the poke tacos with sashimi tuna, shallots, sesame, soy and blue corn tortilla chips – they are to die for.

Day two of our Santa Monica visit began by renting bikes to ride along Venice Beach, naturally back in the direction of Abbot Kinney Road for breakfast (we became a little obsessed).

We spotted a trendy little industrial coffee shop the day before that was flooded with people… so obviously we had to try it. It’s called Intelligentsia (though you won’t see any signage outside) and the coffee was worth the hype. They have both nut milk and dairy milk options, catering to all.

We then wandered down the road for breakfast at The Butcher’s Daughter (don’t be fooled by the name, it’s a vegetarian joint). They have a great selection of healthy breakfasts in a beautiful green succulent setting. After eyeing off the meals at the table next to us, we couldn’t go past the smashed avo which they serve on a delicious gluten free bread. To drink we ordered hot elixirs (chilli hot choc and turmeric latte… both amazing) as well as a selection of cold-pressed juices to share.

After breakfast we headed back in the direction of Shutters, leaving behind our bikes to go explore Santa Monica Pier and the original Muscle Beach location. It was fascinating to see all the street performers and acrobatics taking place – it was unlike anything I’ve seen before.

We later enjoyed a refreshing mint tea at the famous Ivy At The Shore, right by the pier. It had quite an old fashioned feel to it and a very ‘LA’ vibe.

For our final LA dinner, my sister had told me that we absolutely had to go to Gjelina, an Italian restaurant with the world’s best pizza (note: you need to book in advance or be prepared to wait in line!) We had the mushroom, truffle oil and goats cheese pizza and let’s just say we can understand why this place constantly has a queue.

Around the corner from Gjelina is Erewhon Natural Foods Market where we went to stock up on some plane snacks. Tip: make sure you try LuLu’s Raw Chocolate Truffles… They are expensive but worth every bite. If you’re a bit weird like us and enjoy grocery shopping (especially in health food stores), you will love this place.  If you are staying in an airBnB, or other self catering accommodation you won’t be short of healthy, ready prepared meal choices here.

Our flight was very early so we had to wake up at about 5am… Luckily we were prepared, having purchased pressed juicery cacao smoothies to get us through. To our surprise, we also found a good selection of healthy food at the airport…  even an acai bowl from Earth Bar.